There was a small intra-Axial spat going on over at The Other McCain a few days ago. The issue arose as to whether or not Paco was a member of good standing among the Axis of Fedora.

Questioning Paco's praxis in the Axis is understandable. There is a lot of specialization within the Axis of Fedora. First and foremost, you have the Axis Storm Troopers like Da Techguy, Smitty and Stacy, and Bob Belvedere just to name but a very few. Then you have the lesser known units within the Axis. It is in one of these that we will find Paco... if you are very, very observant. Paco is in the Clandestine Investigative Axis; affectionately known as the Slurpee Spooks. He is a master of disguise changes and camouflage. A member of the unwashed liberal masses may not even see him, let along identify him as a member of the Axis of Fedora.

Here is perhaps the only photo in existence while Paco is on duty. (This is one single shot. Paco is a quick change artist. The only 'shopping done was to remove the phone booth between the 'two' images where Paco did his quick change.) 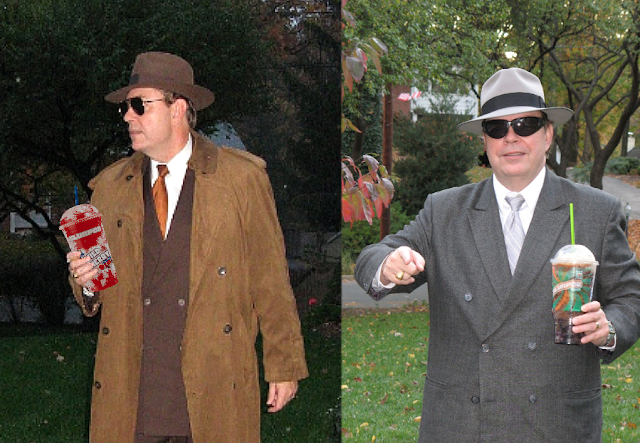 "Are you trying to tell us that they are the same person?"

"But, but they are so different! One has a brown fedora; the other, gray. One is wearing a gray suit; the other, brown. One is wearing a brown trench coat with an orange tie. The other is a light gray tie. One looks to the right; the other, straight ahead. One is right handed; the other, left. One is sipping on a cherry Slurpee; the other a pina colada Slurpee. One has the aura of Clint Eastwood; the other, John Wayne. Wow, no wonder there is confusion as to Paco's membership in the Axis of Fedora."