Barack Obama traveled to Massachusetts to campaign for Martha Coakley and a Republican wins. Congratulations, Massachusetts.

When Obama went to Virginia to campaign for Deeds' gubernatorial run, the Republican won. Congratulations, Mike.

Obama went to New Jersey to campaign for Corzine's re-election as governor. The Republican won. Congratulations, Chris and Clifton.

We residents of Janesville, Wisconsin learned the lesson of Obama's campaigning long ago. It was good for photo ops and good for Obama, but the ostensible target for receiving benefit of Obama's visit is badly damaged.

Tuesday, February 12th, 2008, Janesville readied to be honored by an Obama visit:


Democratic presidential candidate Barack Obama will be in Janesville on Wednesday morning.

“We had a conference call this morning, and it appears that his visit is going to be at the plant,” said Mary Fanning, General Motors plant spokeswoman.

Fanning said she could not release any more details until she had spoken with officials at GM headquarters in Detroit. 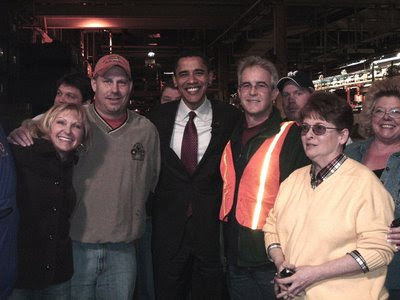 
A decades-old rumor became harsh reality today when General Motors announced that it will cease production at its storied Janesville assembly plant by the end of 2010. [...]

“It’s not likely that any new products will be assigned to the plants scheduled to cease production, and it would be inaccurate for me to leave anyone with a lot of optimism about that.” [...]

Soon after GM announced its impending production cut, seating supplier Lear Corp. said it will lay off up to 336 of its 670 hourly employees. LSI, which sequences parts into the plant, said it will eliminate up to 132 of its 235 jobs. They are expected to end production entirely by 2010 when GM shuts down here.

“This was an extremely difficult decision for us to make,” Clarke said. “They’ve done a fine job at that facility producing great vehicles.

“We’ve had a great relationship with the people and the community.” [...]


1918—General Motors bought the Janesville Machine Co., merged it with Samson Tractor Co. of Stockton, Calif., and built a new plant for Samson operations in Janesville.

Today... crickets chirping to the tune of 'There's a tear in my beer 'cause I'm cryin' for you, dear.'
Posted by Steve Burri at 6:19 PM