I sleep all night and I work all day.
I could see this guy taking David Obey's place in Congress:

Duffy, you call that a knife?

Perhaps Sean Duffy will be another John Potter:

Just before the Civil War, the issue of slavery tore apart the U.S. Congress. On February 8, 1858, Wisconsin Rep. John Potter (considered a backwoods hooligan by Southern aristocrats) leaped into a fight on the House floor. When Potter embarrassed a pro-slavery brawler by pulling off his wig, the gallery shouted that he'd taken a Southern scalp. Potter emerged from the melee covered in blood and marked by slave owners as an enemy.

Two years later, on April 5, 1860, he accused Virginia Rep. Roger Pryor of falsifying the Congressional record. Pryor, feeling his character impugned, challenged Potter to a duel. According to Southern custom, a person challenged had the right to choose weapons. Potter replied that he would only fight with "Bowie knives in a closed room," and his Southern challenger beat a hasty retreat. Republican supporters around the nation sent Potter Bowie knives as a tribute, including this six-foot-long one. [Source: Badger Saints and Sinners by Fred L. Holmes] 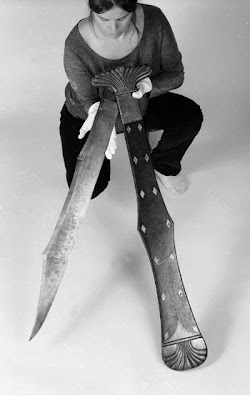