Super Bowl XLV will Resemble 2010 Midterm Elections
The scientists and researchers in our secret basement laboratory have been struggling to find how the Green Bay Packers will fulfill their Season of Vengeance against the Pittsburgh Steelers in two weeks. At first they thought that a Packer loss in Pittsburgh last season was the cause. Ben Roethlisberger threw for 503 yards against the vaunted Green Bay defense and scored on the game's last play to win. But that is not the reason for the Pack meting out a terrible vengeance upon the present day AFC Champion Steelers.

The Packers' Vengeance is stated in an open letter to the people of Pennsylvania:

Based on the experiences that I have had in my seventy-five years and my assessment of what I think our nation needs to make real the change that is so needed, I am proud and now feel compelled to endorse Senator Barack Obama.

This is not something that I do regularly but as I listen to the candidates in this race, I am struck that we continue to hear about the problems and the same challenges that we have been talking about for decades. Protecting jobs here in Pennsylvania, breaking our dangerous and costly addiction to foreign oil, making health care accessible and affordable " these are neither new issues nor new ideas. And yet we have failed to make real progress.

As a grandfather and a citizen of this community I think Barack Obama's, thoughtful, strategic approach is important for America. When I hear how excited young people seem to be when they talk about this man, I believe he will do what is best for them which is to inspire them to be great Americans.

This time, we can't afford to wait. Our country needs a new direction and a new kind of leadership " the kind of leadership, judgment and experience that Senator Obama has demonstrated in more than 20 years of public service, and in a particularly impressive way in this campaign. Senator Obama has rejected the say-and-do anything tactics that puts winning elections ahead of governing the country. And he has rejected the back-room politics in favor of opening government up to the people. Barack Obama is the one candidate in this race who can finally put an end to business as usual in Washington and bring about real change for Pittsburgh and the country as a whole. He has inspired me and so many other people around our country with new ideas and fresh perspectives.

True sports fans know that you support your team even when they are the underdogs. Barack Obama is the underdog here but it is with great pride that I join his team.

When I think of Barack Obama's America I have great hope. I support his candidacy and look forward to his Presidency

In contrast, an open letter to the residents of Wisconsin from a part owner of the Green Bay Packers: 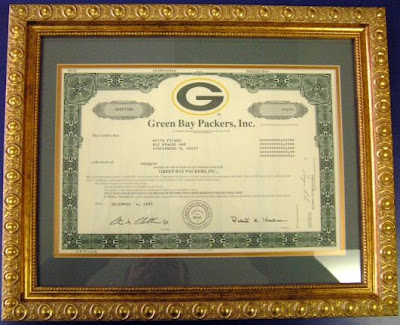 In Super Bowl XLV, Green Bay plays for the Tea Partyers and the Steelers play on behalf of the Obama Administration.