Unions to which I Formerly Belonged

John Hinderaker posts an article on Power Line titled Who Are the Demons Here? One item contained within is a chart which lists the top political contributors from 1989 to present and gives percentages donations to Republican or Democrat races.

Here are the top 20 contributors with the unions to which I once belonged marked in yellow: 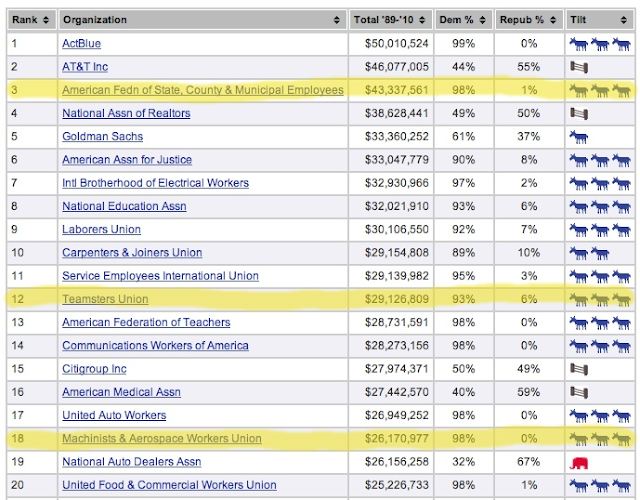 When I was a Teamster and then a Machinist & Aerospace Worker I was a far left liberal, but by the time I was required through my county employment to pay AFSCME dues, I had turned conservative. I had no option to opt out of this public union.

While I was working for the county it was going through serious budget woes. They were beginning to heavily scale back the number of total patients and closing some units altogether. Many of my fellow workers complained that the patients would have no place to go. I suggested that as a union we could demand lower wages in order to save beds for these needy patients. But, from the slack jaws I received in response, I concluded that it really wasn't THAT important.