A Novel by Brian J. Noggle
.
Four twenty-somethings, talented, but immature, are washed out during corporate downsizing. Their dreams go down the drain with it. Instead of participating in an Occupy St. Louis protest, they decide to directly seek revenge on their boss and his most prized possession.


He froze, keys half sorted in his hand, when he heard a sudden arrhythmic ticking.

"It came from this closet," Kevin said. He'd heard it, too, like water dripping. Perhaps John Donnelly had left something leaking in the closet, or exposed water pipes were condensing, or something. He opened the door.

"Don't open that!" Robert said, and it was too late.

Kevin saw it wasn't a closet, but the basement steps; they went down to the right. The ticking increased as the light chased the shadows from the top of the stairs. A low growl started, and Kevin leapt backwards from the doorway, brushing the island and jamming steel into his back. Kevin wrapped his hands around the butt of the pistol and regained his balance even as the snarling dog reached the top step and turned on him.

He pointed the gun at the white blur as it reached his feet and pawed and gnashed at his ankles...

"Good work. You have successfully killed the savage Bichon Frise, ..."

PETA has been notified and should be showing up at Brian J. Noggle's door any time now.

John Donnelly's Gold is Mr. Noggle's first novel. It was a very enjoyable read and gives some interesting observations into the human nature of today's twenty-somethings. 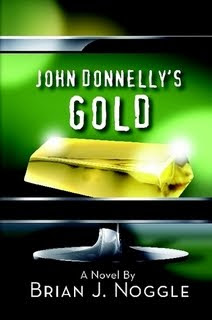