According to the world renowned zoologist, Plebian, who is so famous that he has to use one name only, global warming has already taken a deadly toll:

"Prominent environmental groups today declared April 1 a “National Day of Mourning” for the loss of another species to global climate change. Researchers today confirmed that there are no surviving members either in the wild or in captivity of the genus Homo Erectus Hirsutus, also known as the Pacific Bigfoot."

Chet Bellweather, Chief Researcher of the Pacific Bigfoot Resource Centre: "In 2000 we only had two sightings, and we haven’t heard anything since early Fall 2002 when some hikers saw a baby Bigfoot get eaten by a bear."

Al Gore: "But now we come along with SUVs and private planes and zinc mines and drive them to extinction. Mark my words: a great reckoning is coming, and we can only hope that Mother Nature is kinder to us that we have been to the Bigfeet!"

Bellweather: "And I’ve been getting pessimistic reports from Scottish colleagues about the numbers of Loch Ness Monsters sighted over the past few years. Few people realize how fragile these animals are. In a rare success story, since their successful introduction in the US in the 80’s Leprechauns appear to be out of danger."

However, researchers from my secret basement laboratory have discovered that Homo erectus hirsutus has simply migrated from the Pacific Northwest to South Central Wisconsin. The specimen pictured below was discovered wandering about in Janesville's Oakhill Cemetery muttering the mantra, "The End Is Near! Beware, Global Warming and Brimstone!" 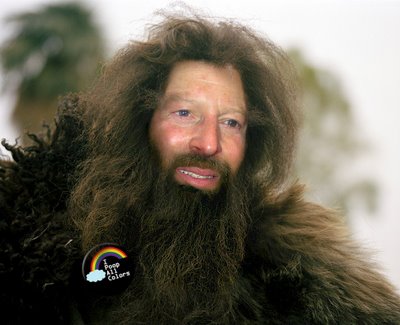 The loss of the Dodo was a tragedy.