The Obama Administration Has Exhibited Transparency

Long ago President Obama promised to make his administration entirely transparent. He had hoped to benefit by the beliefs that the Bush Administration was not open and had many questionable operations going on behind the scenes.

Most would say that President Obama has muddied more waters than a carp having a seizure. Despite this seeming outward opacity, I would claim that the President has been very transparent on a much deeper level.

From the looks of it, it appears that more and more Americans are beginning to see right through Obama. That's transparency.

What Americans are beginning to see. The disguise is an attempt to evade the President's Tattletale List. 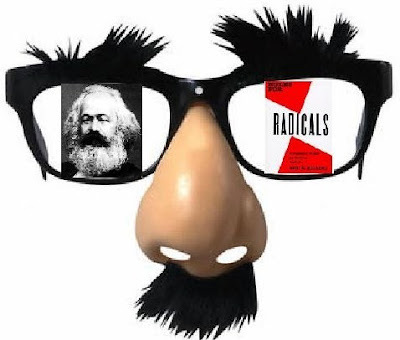 A video: Obama's Communist Influences came to me and fits with what he is doing. It was hard to believe before; now he is proving it.
***Major Cook was fired for questioning B. Obama's right to be Commander in Chief in court.
***He refuses access to school, health, passport, and birth records that could end this controversy.
***High level media connection says she delivered notices not to speak about the Obama birth certificate in 2008 to top media.
***Pressure is coming against Lou Dobbs etc. This is not freedom.
If we are not part of the solution, we are part of the problem; he only has to release his documents. It is as easy as that. Whether you are for him or against him, we still need to see his documents; that is transparency.

Bill Maher’s dialogue: "Birthers Must Be Stopped." Let the president stop them by releasing his records.. Ridicule is a Communist tactic “when the sane are made to appear insane and the insane act as the world’s psychiatrists…” a quote from Mind-Washing in America by one of the leading American authorities on all aspects of the Communist conspiracy, former Senator Jack Tenney. He speaks of “the efforts of a small .. fraction of society to brainwash the overwhelming majority of its citizens…” Truth and justice win over lies and deception.
Marie Devine
http://www.divine-way.com

I sent an email to President Obama & US Attorney in DC, CD Phillips on 7-30-09. The president is a 15 year citizen of Indonesia and should not be making decisions for America.

(Quo Warranto-Wikipedia: Quo warranto today
In the United States today, quo warranto usually arises in a civil case as a plaintiff's claim (and thus a "cause of action" instead of a writ) that some governmental or corporate official was not validly elected to that office or is wrongfully exercising powers beyond (or ultra vires) those authorized by statute or by the corporation's charter.)